With his new sculptures, the Syrian artist who lives in the US sees it as his ‘duty’ to create art that reminds people of the beauty of his country.

In Mohamad Hafez’s sculptures, every detail brings a part of Syria to life.

A doll-sized porcelain plate represents how people would send food to their neighbors. Syrian and Jewish fabric fragments on a clothes line embody the region’s diversity. And the decorations on a building mimic Greek and Roman symbols all over old city streets.

At the Brooklyn Museum, Hafez paces near his work, studying visitors’ reactions. He shoots videos on his phone, or reads descriptions about Syria, Then and Now. But he tries not to reveal his identity.

“I don’t want to speak,” said Hafez. “If I speak – if I open my mouth that I am a Muslim, Arab, Syrian immigrant – some of my audience would have already judged me three million ways, and they might close their ears or their hearts to my message. But I let the work speak on my behalf and I be a fly on the wall.”

When Hafez came to the United States from Syria 15 years ago, soon after September 11, fear of Islam and Muslims was at its peak. The art that has made him famous was once a therapeutic gut reaction to President George W Bush’s travel regulations targeting Muslim-majority countries that made it difficult for him to visit home. Back then, Syrians were lumped in with other Muslims, indistinguishable in the American mind.

But in recent years, Syria’s global image has been rocked by a bloody war, and Hafez’s work has evolved to reflect that. His sculptures are how he “creatively weeps” for the loss of culture and architecture in his home country, where a 1,200-year-old minaret has been blown out of existence and buildings that were siblings to the Vatican may never get rebuilt.

Over the last few months, his art has appeared in the United Kingdom, Washington DC, Maine, Rhode Island, Connecticut and Brooklyn, among other locations. It’s safe to say he’s on the rise, a fact he finds bittersweet.

“Who wants to be known as [successful] on the corpse of his own nation and culture?” Hafez said. “I would throw all of that in the garbage in a heartbeat and get three hours of our life back.”

Recently, Hafez had an epiphany: it is unlikely that he and other displaced Syrians will return to Syria anytime soon. Their exile could last a lifetime. And as they let go of the romantic notion of homecoming, all that remains is a haunting collection of memories and stories.

“You cannot format your heart and forget the past,” Hafez said.

The revelation compelled him to turn inward for a new series of sculptures inspired by old Aleppo and Damascus. Each of his creations represents hundreds of hours of work, and for him, that’s good: it’s the process that gives him therapy, not the end result.

“If humans had the technological ability to have 3D printers print your emotions and emotional baggage, my 3D printer would be spitting out these things,” Hafez said.

In the new series, Damascene Athan, he nostalgically depicts Syria’s recent history, before gas attacks and bombings devastated the community. Each remodel is nestled inside a decorative mirror frame reminiscent of a Victorian style that was popular in Syria. But the allusion goes beyond aesthetic to speak to the emotional baggage Hafez sees inside himself. 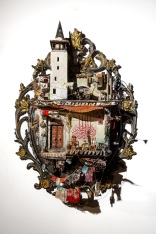 Much of the content in Damascene Athan comes from his last visit to Syria in 2011, when he suspected he might not go back. At the time, the feeling was inexplicable; his country was doing well, his family members were thriving and he was considering abandoning America to return home. Still, he trusted his instinct to capture everything he could before he left.

One of the new pieces – the miniature courtyard house that now sits in a temporary exhibit at the Brooklyn Museum – looks much like the home where his father grew up. It shows Syria at peace, incorporating the everyday cultural moments Hafez remembers.

An audioscape floods the scene, switching between familiar sounds such as calls to prayer or children playing in the street. Hafez secretly captured the recordings while he and his friends played cards at a cafe in 2011. One of the clips is of an old man who approached them and started crying that the Arab Spring would bring down their country. At the time, Hafez and his friends laughed at the man.

Beyond the audio, Hafez has used foreshadowing throughout his work, including small security cameras pointed toward viewers to represent Syria’s perceived surveillance state and secret police cars parked outside homes to signal violence on the horizon. But Damascene Athan is not about predicting the future; instead, it preserves the past for people who never knew it.

Hafez understands that displaced Syrian children are bullied everyday because of their origins. In the face of questions like “where did you park your camel?”, Muhammads have started going by Mike.

Through his sculptures, Hafez hopes to show kids why they should be proud of everything they bring to the table – including their homeland.

“We owe it to the generations that grew up knowing nothing but war and conflicts in the region … to remind them of the golden age of our cultures,” Hafez said. “That’s why none of these frames depict destruction, but rather beautiful, old, rustic architecture that shows thousands of years of history and richness.”