The floor of Safwan Dahoul’s Sheikh Zayed Road studio is littered with cans of industrial paint. Plastic plates double as palettes, and the brushes, the kind that you can buy from any hardware store, lay waiting to be picked up by their owner. “I prefer to use these ‘poor’ paints,” says Dahoul, explaining the lack of specific artistic materials in his studio. “These paints are more generous. They remind me of the kind of people you meet in your life who are not so fortunate, but when you go into their home you will find amazing hospitality.”

Dahoul uses only black, white and grey, saying he has “forgotten” about all the other colours.

“There is an old proverb in Arabic that says, the fewer the words, the better. For me it is the same with colour. You can say a lot more with nuance.”

It has been almost 27 years since Safwan Dahoul completed his first Dream. Since 1987, he has painted the same woman in the same muted monochromatic colours on what he assumes has been more than 1,000 canvases (although he never kept count). Every time, he titled it Dream.

Long before he gained international recognition and became one of the highest-grossing Middle Eastern artists, Dahoul was dedicated to this figure who, conversely, has little to do with his night-time reveries.

“The first time I painted her I called it Dream because I didn’t want to have to explain it,” he says. “I didn’t know then that it was going to be part of a series or that she would stay with me for the rest of my life.”

He lets out a small chuckle as he talks about her and his gaze often returns to an unfinished canvas on the wall in his Dubai studio as if she is part of the conversation, too.

He still dislikes giving explanations, but when pressed, he reveals that when he started painting her, she was based on a real woman – someone he had “an impossible love story with” while he was still a young man. But as time went on, she became something else: the narrator of his life, a symbol through which he passed his thoughts and reflections and who perhaps at times he used to talk to God. He says he has recently started to see his late wife in the work (she passed away six years ago). But in the end, there is no fixed answer to the question of her ­identity.

“Sometimes in life, you think you have a story that you need to tell but then you realise you have made up the story,” Dahoul muses.

“The face you see in my work is the narrator. She is the person who writes my daily journal and when I come to paint her I don’t know what she is going to say, we just sit there and have a debate.”

So, the shadowy faces with large eyes, like the Eye of Horus, and pools of expression in the gradients of grey, white and black in a variety of different scenes, actually tell the story of Dahoul’s life.

And on Wednesday, when a collection of new works opens in Ayyam Gallery in Dubai International Financial Centre, viewers will see the story of Dahoul’s homeland, Syria, which he was forced to leave because of the continuing conflict.

“All my recent work is about Syria whether you realise it or not,” says Dahoul. “It’s been a while now that I have been thinking about God and wondering what He is thinking right now with everything that is going on in Syria.”

The sense of melancholy that emanates from the paintings is Dahoul’s attempt, then, to convey the atrocity that is happening there and to connect the viewer with the pain of the people.

In Dream #71, the face is crumpled like a discarded piece of paper, the effect representing what would happen if you sucked all the oxygen out of the painting. In #67, a wide, shocked eye stares down on rows of bodies; in #68, the female figure is squeezed into a small box.

“Sometimes I think people feel more than I do from the paintings, which is why I don’t like to explain them too much,” he says.

Dahoul’s reluctance to talk about his work and his humility are endearing parts of his character and add another element of intrigue to his lifetime oeuvre. So, too, does his lack of attachment to his work.

He only started to give numbers to the paintings after Khaled Samawi, the co-founder of Ayyam Gallery, directed him to do so. And if it weren’t for the photographs his wife had taken, there would be no record of his previous work.

He gives a wry smile when talking about this subject. “For me, the important thing is the process. Once I am finished with a painting I don’t want to see it again. For me that conversation is over and I am looking forward to the next.” 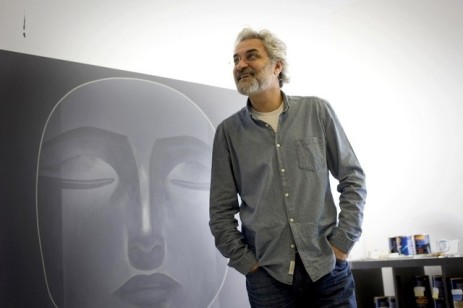 The Syrian artist Safwan Dahoul in his Dubai studio. 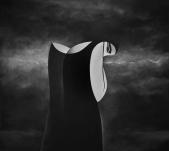 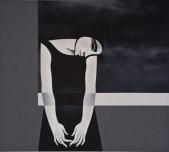 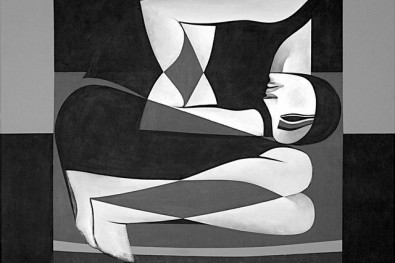