You look, meditate, explore: everything opens the doors of seduction to you. Each painting throws its net over you. The painting does not invite you to submit, it offers to excite, to seduce you, all the while keeping its distance, in order to seduce you more, in a striking provocation that prepares you to be more attracted and fascinated.

The flame of this seduction is earthly. Lines, colors, touches, spots, half circles, half arcs, affinities, contradictions, cohesions, collapse, structures, fearful things. Everything comes from matter like springs and volcanoes. The skies are margins. Some of them are dust and ruins.

Seduction: this is the other name of Ahmad Moualla’studio.

When you walk inside this studio you say to yourself: I like what contradicts me. It completes me and makes me different.

You say: similarity is too poor. It doubles me, repeats me.

A studio – a reality closer to the imagination than the eye. An imagination that is more real than reality. A theater in which the prevalent, the ready, change in the horizon of another creation. A world of eruptions and outbursts.

Art in this studio is the art of creative energy: horizontal, vertical, high, extreme. The goal is not to snatch the world from the mistiness of movement. The goal is grounding it in the movement of discovery and appearance. Creativity is the invisible wakeful artist who holds the threads that seduction weaves.

Oh womb of matter, you are very rich and generous!

Say then, to matter: You are the spacious house for the arrival of chances.

Say to the chances: You are the mud of permanent cleaving where all kinds of walls collapse.

Nothing, except great and permanent work, can achieve what suits human being, in a continuous openness to the possibility of failure, while the radiance of desire and the dust of disappointment embrace each other in our eyelashes, outside the culture of despair, inside adventure and persistence.

What surprises us is chance: It liberates us from anxiety and bewilderment. Chance, what we usually call luck, surprises the system of chains that surrounds us. This system cannot defeat chance. The chance that work nurtures and looks after emerges out of all this like perfume’s emanation from the rose.

This chance is creation in the beauty of its spontaneity. Chance consumes all the earthly and heavenly systems.

To create is also to deplete systems.

As if chance is a kind of special necessity that creative work invents.

The painting, at Ahmad Moualla’s studio, is a space in which chances erupt. When you meditate on his painting you feel that you can play with certainty, that you are drunk between its arms. When you are under the painting’s arc, when you are its captive, you feel that you are freer. The painting makes you feel the possibility of unity between the essence and the nonessential, the everlasting and the mortal, absurdity and meaning. You see how this magic is soaked with the sweat of matter, emerging from the gardens of color.

The rational, the methodological, the syllogism, the regulated is unable to control the course of things. Things, in their deep being, are a complete freedom, a possibility on the verge of happening: Thus the painting speaks.

There is not any prejudice. What is doomed here are mere words. Creation has a chemistry that puts the law of things in tubes that the imagination makes. It also depends on intuition and dreaming. These tubes are also made by an energy that deconstructs the hierarchal relationship among things. Thus, when we meditate on the painting, we discover that what chance produces is totally different from what regimes, systems and necessities produce. We also discover that it is richer with meaning than the things that come according to their reasons. What comes by chance, through the dream or the intuition or the occasion, has meanings dissimilar from what the necessity, logic, the cause and effect produce. In our organized, defined closed world chances create unique and special works. The nonessential gains a meaning that is deeper and more attractive than the things that are rationally connected.

At Ahmad Moualla’s studio, it occurs to you to remember two points of view concerning the relation between art and existence, in order to appreciate well his art and studio.

The first point of view says that the world is mistiness or confusion, and man should organize it in a coherent and logical way in accordance with the relation between cause and effect.

The second point of view says that the world is a living being and it is connected in accordance with a continuous cycle of transformations, in endless forms and manifestations.

Remembering this allows you to add: Art at this studio moves in the horizon of the second point of view.

Imagine now in writing that you leave your words to their free play, so they organize themselves in the horizon of this play. You may see language as if it is condensed in one sentence, because seduction weaves its letters and creates its focus.

What is said about the word, here, applies to color. Color seems sometimes in the painting as if it wears all the other colors. You will see things lose their magic when they are not connected by seductive links. You will be more certain that the first is a kind of heat shortage in the sun of knowledge, in the heart, the senses and the imagination.

Destroying such seductive energy is a rational mission that all people know. Some liberated themselves from it, some are struggling to liberate themselves. When the answer dominates, and the maker of the universe is the opponent and enemy of the question, work and thinking that aim at liberation continue for a long time.

Art destroys what destroys this energy: it deconstructs rational links which correspond to the culture of the answer, working to involve all the things like waves in the ocean of questions, in the ocean of chances.

The studio is an ocean. Ebb and flow. It has no beaches. It is created by waves of color that recreate it again and again. All it has is seduction and attraction, it is the siege imposed on the logic of the cause and effect, as if it is a space that liberates the imagination, taste, intuition, raving, and liberates how, when, and where. Playing as if life moves in the cradle, obliterating the causes with the manifestations of results, cancelling the logical links, and returning things to their clear and direct presence, seen with the eye of transformation, in the movement of transformation. A raving of languages and celebrations. Rituals and prayers.

Contradiction is the main feature of the universe, not reconciliations or fabrications. This is the feature that invites, in artistic expression, fascinating, intoxicating forms. To make water and fire, rain and clarity, the sun and the moon sit on one canvas: this is the adventure of creativity, and that is what distinguishes Ahmad Moualla’s works. It puts you, face to face, with the transformation of things. How can the word become a key to the door of time? How can time become a color on the canvas? How can color become singing and dancing at the same time? A becoming that undresses things from their special features, and throws them to a magnetism that escapes logical connection, to the magnetism of energy that transforms itself and transforms things. The work of art, in the horizon of these transformations, is not a mere beautiful work. It is more than beautiful, and in this “more than beautiful” lies the inexhaustible: the sharpness, the doubling, the flowing, breaking the closed, the specific, exploding chances, and that which is difficult to define.

Due to all kinds of invariables, our history became an accumulation: an accumulation of events, works, things, ideas, not pleasure, not depth. No dimension. Darkness in front of us. Behind us a light that does not illuminate anything. A light on the verge of becoming another darkness. And here is our daily world: bodies without limbs. Times empty of everything except memory. The time that only possesses memory is a time without memory. The father kills his son because he wants to create him according to his own image. The mother eats her breasts. Meaningless is the king of all meanings.

Everything descends from the Hand of God, as if we do not live in the place in as much we live in the beyond. We touch its dust, which descends upon us, familiar and soft. We walk in its shadow, which gives us the illusion that all the suns are behind it. True, it seems as if the heat of death and coldness of the grave are one rhyme in the poem of our existence.

Things do not end. We only know one beginning, which is the first beginning. Things are hung in the canopy of the beyond. A canopy “the size of Heaven and Earth”.

These things do not return to their nature or natural course except through a new artistic reading, in the horizon of seduction, in which Ahmad Moulla’s passions move. Seduction here is connected to what challenges and explodes, it is based on a kind of noble and sublime creative misdirection.

Ali Ahmad Said Esber (Arabic: علي أحمد سعيد إسبر‎, romanised: ʿAlī Aḥmad Saʿīd Aṣbar, born 1 January 1930), also known by the pen name Adonis or Adunis (Arabic: أدونيس, Adūnīs), is a Syrian poet, essayist and translator considered one of the most influential and dominant Arab poets of the modern era. He led a modernist revolution in the second half of the 20th century, exerting a seismic influence on Arabic poetry comparable to T.S. Eliot’s in the anglophone world (Source: Wikipedia). 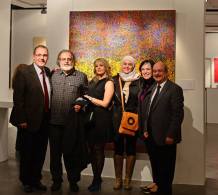 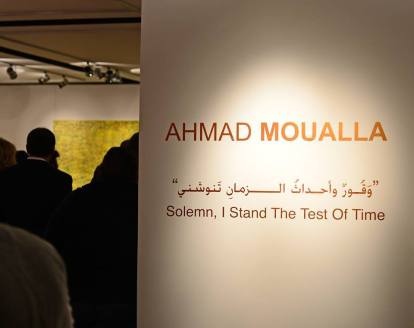 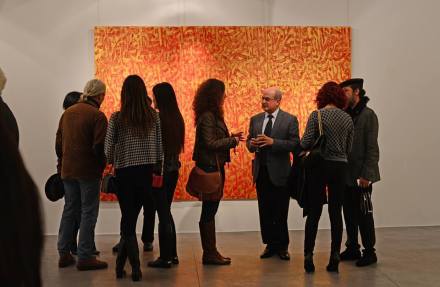 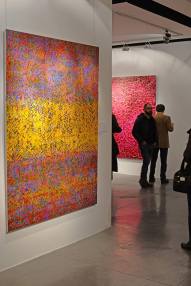